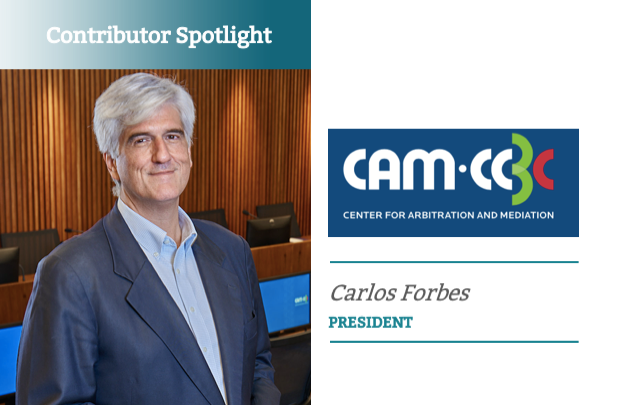 Tell us a little bit about your background and how you became involved in dispute resolution?

I started at a time dispute resolution in Brazil had almost no alternative to litigation before the State Courts. As a counsel, I have concentrated mostly in civil litigation, restructuring and insolvency, as well as regulatory disputes, with emphasis on telecommunications and energy.

My first Arbitration was seated in London, acting as a co-counsel, in a proceeding that literally changed my career.

From that moment on, I started studying the method in search for a more rational and effective solution for my clients and ended up as the Vice President of the Brazilian Arbitration Committee (CBAr).

Arbitration has proven to be quite successful in Brazil and I am currently the President of the Center for Arbitration and Mediation of the Chamber of Commerce Brazil-Canada (CAM-CCBC). I routinely sit as an arbitrator involving civil, commercial, construction and corporate disputes and I still act as counsel in international and domestic arbitrations, as well as before State Courts in Brazil.

The CAM-CCBC is a Brazilian not-for-profit organization founded in 1979 by a group of lawyers and professors of the University of São Paulo (USP), with the support of the Chamber of Commerce Brazil-Canada.

Parties have initiated at CAM-CCBC more than 950 proceedings for the resolution of disputes estimated in over USD 17 billion[1]. ISO 9001 certified, the CAM-CCBC has three major priorities: (i) excellence in case management, (ii) promotion of ADRs and (iii) development of the best practices.

What is the advantage of being a contributor to DRD's database?

Transparency is essential to Arbitration’s future. Therefore, besides the continuous improvements of its case management practices, the CAM-CCBC is also in constant pursuit of the desired transparency in Arbitration. Recently the CAM-CCBC has enacted Administrative Resolutions dealing with publicity in Arbitrations involving the Direct Public Administration entities (AR 15/2016) and recommendations regarding the existence of third-party funding (AR 18/2016).

In addition to being an efficient tool in favor of transparency, the contribution to DRD has also proven to be of great assistance in the analysis of CAM-CCBC’s international cases and it provides for a wide range of critical information of the market, in a very concise way.

The CAM-CCBC is honored to be a contributor of the Dispute Resolution Data and we strongly recommend other institutions to join for an even more effective tool for companies, lawyers, arbitrators and institutions alike.