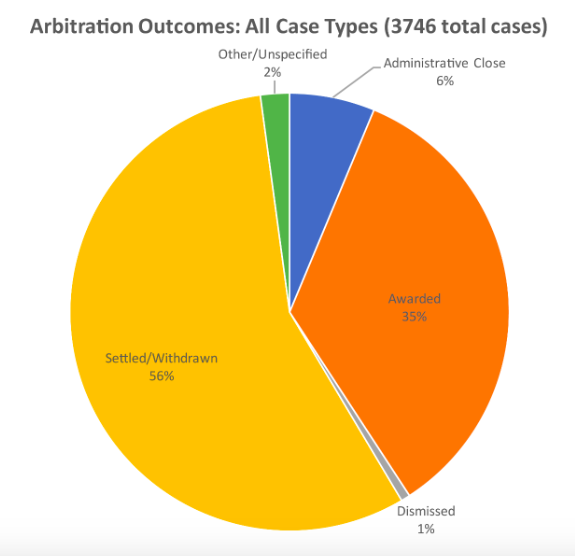 A Data-Driven Exploration of Arbitration as a Settlement Tool: Does Reality Match Perception?

Arbitration as a Settlement Tool: Costly and Slow?

As an alternative dispute resolution (ADR) mechanism, arbitration is not without its critics, particularly when it comes to time and money spent. According to White & Case, LLP’s 2018 International Arbitration Survey: The Evolution of International Arbitration, respectively 67% and 34% of survey respondents indicated “Cost” and “Lack of speed” as being one of the three worst characteristics of international arbitration, and conversely, merely 3% and 12% of respondents respectively listed “Cost” and “Speed” as valuable characteristics of international arbitration. These observations underscore similar perceptions and concerns, regarding the costs of arbitration, which exist in the literature and elsewhere in the dispute resolution community.

If the perception of a protracted duration and associated high cost truly makes arbitration a less favorable dispute resolution mechanism, then one would expect that an analysis of case data would reveal that most arbitrations do not reach an early conclusion but rather proceed to settlement at an advanced stage, such as after an oral hearing or to determination in an award. Here, we investigate the extent to which these perceptions are reflected in reality by exploring a comprehensive repository of recent arbitration case data collected and maintained by Dispute Resolution Data (DRD), an organization providing online, subscription-based access to aggregated arbitration and mediation case data.

Elucidating the True Nature of Arbitration as a Settlement Tool

As of May 2018, the DRD database contains approximately 216,000 data points, collected across 4,100 alternative dispute resolution cases, which reflect categorical and quantitative information that includes case types, commercial and industrial sectors, geographic regions, various costs and fees, dates of key events, outcomes, award amounts, and much more. These data, collected from arbitration institutions and mediation organizations through a carefully designed and controlled user interface provided via the DRD website, fill a long-standing need for greater availability, clarity, and transparency of detailed statistics in arbitration for parties who are faced with or engaged in arbitration and for parties who are considering their ADR options but may not fully appreciate what is involved in such key areas as cost and duration.

Of the 4,100 cases in the DRD database, nearly 3,750 (or 91%) represent international commercial arbitration, while the remainder are international commercial mediation cases. A high-level summary of international arbitration case outcomes is presented in Figure 1. Overall, just over half (56%) of all the arbitrations informing the DRD data ended in either settlement or withdrawal, with a final award being rendered in 35%, administrative closure in 6%, dismissal in 1%, and the remaining 2% of cases having some other, unspecified outcome. It is worth noting that, although the DRD database allows for “withdrawal” to be entered as a separate case outcome, DRD’s position is that a “withdrawal” also indicates a settlement, the terms of which include the withdrawal of the claim. Consequently, DRD treats “settlement or withdrawal” as a single, combined case outcome for the purpose of this analysis.

The DRD database reflects arbitration case types from many industry and commercial sectors, with some sectors more widely represented than others. Presently, the top four case types, in terms of the number of records entered, include commercial contracts (779 cases), hospitality and travel (453 cases), wholesale and retail trade (299 cases), and financial services and banking (254 cases). From Figure 2, we can see that in all but one of these four predominant case types, the most frequent outcome was settlement or withdrawal.

While the representations of the cases in Figures 1 and 2 suggest that settlement is a more likely outcome than any other conclusion, they each nonetheless represent a single, “static” view with no reference to the point in the arbitration at which settlement occurred.

When Did Settlement Occur?

For those arbitrations that ended in settlement or withdrawal, the point in the arbitration at which this outcome occurred provides a benchmark duration for parties that are actively involved in or otherwise contemplating arbitration (actually or academically) and its potential costs. For each of the arbitrations that settled or were withdrawn, the DRD dataset includes dates of key points in the arbitration, including the date on which the claim was filed (the “claim date”) as well as the dates, where applicable, of any counterclaim, preliminary hearing, and any hearing on the merits. As shown in Figures 3 and 4, the most recent event prior to settlement or withdrawal, regardless of case type, was most frequently the claim date itself, from which we compute the overall duration of the proceedings. Summary plots of these data are shown in Figure 5; for each of the four predominant case types, we show the average length of time (in days) from claim date to settlement, with the margin of error (also in days) computed at the 95% confidence level.

Our high-level analysis of data on hundreds of actual international commercial arbitrations suggests that arbitration has the potential to be an effective tool for settlement as well as for binding determination, given that settlement or withdrawal is the most frequent outcome in the arbitrations recorded in the DRD repository. Of those cases that settled or were withdrawn, the vast majority settled before any other significant step in the arbitration process after the claim date (i.e., counterclaim, preliminary hearing, and/or hearing on the merits). From Figure 5, one sees that among the four most highly represented case types, both the average and median number of days to reach settlement or withdrawal after the claim date (and before any other significant step in the arbitration process) were less than one calendar year, with some variance from one case type to another.

While this analysis does provide evidence to show that settlement is often quickly achieved within arbitration, further study and greater transparency of actual case data is necessary for parties contemplating or actively involved in arbitration to make more fully informed decisions on the duration, costs, and likely outcomes of arbitration. As the DRD repository continues to be populated, we are continuing to apply data analytics to identify trends and patterns that we believe may be useful to those who are evaluating different mechanisms for dispute resolution. In forthcoming studies, we will show the results of deeper investigations into the relationships between and among various dimensions in our dataset. For example, we plan to examine both case type (including more specific subtypes) and case region (that is, where arbitration took place) as factors potentially affecting arbitration outcomes, the time required to reach those outcomes, and the associated costs of achieving those outcomes.